The video park concept – https://youtu.be/FnALUqxHouk – was meant to nudge and persuade the decision makers, not necessarily be a solution. In that case it worked, the Jeffco board finally relented and presented $1m for land purchase and $200K for development in April 2022 – http://tinyurl.com/k9s4p4dj

Friends of Evergreen Dog Park (FEDP), a local group, had presented the land adjacent to Fillius Park to EPRD and Jeffco Open Space as a compromise for the old Stagecoach Park, and both agreed in principle. The possibility of finding a better site to buy is still an option, I believe, but for now the proposed site is still the choice.

The land is just east of Fillius Park and north of H-74 on the bend going to El Rancho. It is about 32 acres and almost entirely inclined but faces south with great views. The trails will be terraced and there will be steps and/or switchbacks to transition to other levels, according to the rough layout I saw. There is about 12 acres of usable area.

How big the car parking will be – I don’t know – this is a good question for the EPRD board members. But it’s not on a through-traffic street, so if there is overflow it won’t affect others because the street is quite long.

Entry fees will be charged. How much for residents or visitors from outside Jeffco is another good question for the board members.

Friends of Evergreen Dog Park has a plan to open an off-leash dog park in Evergreen, but it will take cooperation from Jeffco Open Space and the Evergreen Park & Recreation District to make it happen.

Betsy Rich and Dale Glover with FEDP presented their proposal at an EPRD board meeting on June 28, saying they have found a 36-acre parcel next to Fillius Park near the Evergreen King Soopers. They say with financial backing from Jeffco Open Space, EPRD operating the park and FEDP volunteers helping with dog-park maintenance and more, the venture could be successful.

The board voted unanimously to continue exploring the idea, noting that researching the feasibility of the dog park and operating it would take considerable staff time and effort before the EPRD board would decide whether to move forward. The board appointed board President Don Rosenthal and board member Mary McGhee to serve on a subcommittee looking at the dog-park potential.

“This is a big project, a big push, and you can’t push everything at once,” Rosenthal said. “I’m supportive of pushing this along.”

See also  Why Is Everyone Moving To Colorado?

Board members agreed that community input would be needed before the board would make a decision.

Rosenthal said EPRD staff will determine if the proposed property is the best option for the dog park, then put together a proposed management and staffing plan.

The proposal of Evergreen Dog Park

Glover said the dog park would be fenced with members paying a fee to use the park to help control the number of users. FEDP envisions three trails — one that would make an 8/10-of-a-mile loop along Evergreen Parkway, one in the middle of the hill and one at the top.

He said the north area of the park is heavily wooded so it would provide a buffer for the homes to the north.

Rich said an off-leash dog park was an integral part of recreation activities, noting that the former dog park had 4,000 visitors weekly with 45% coming from outside of Evergreen. She explained if Jeffco Open Space operates a dog park, it is considered a regional park, which brings more visitors from outside the area. She believed the dog park on Stagecoach Boulevard that was closed in 2017 was attractive to outsiders because it was 107 acres rather than the 36 acres being proposed.

Glover promised that FEDP would provide volunteers to help EPRD get the needed permits, and to do maintenance, cleanup, education, trail development and fundraising. FEPD hopes the dog park would support itself financially and could even provide EPRD with additional income for other programs.

“This is perfect for Evergreen,” Glover said. “We all want to go hiking. Having an off-leash area and enjoying the view is the experience we’re looking for.”

The traffic light at Evergreen and Bergen parkways by King Soopers would help regulate traffic flow, he said, and the road is gated, so only those accessing the dog park would get in. Parking would be along the roadway and in a parking area.

Five years of Work is Paying Off

FEDP has been looking for a new dog park location since Jeffco Open Space closed the off-leash park, citing overcrowding, parking issues, animal waste, a contaminated waterway and erosion as reasons for the closure. The closure caused an uproar in Evergreen, and FEDP members said it cleaned up the dog waste, the water wasn’t contaminated, and it was ready to operate the park.

What the Erpd Board has to say..

“This is a big project,” he said. “If we are going to work on this, there is probably something else we won’t be working on. I’d like us to consider what other rec opportunities we could have on that property. … We need to consider this in the context of the strategic plan as well.”

McGhee noted as ERPD looked at the proposal, it would need to ensure that Fillius Park doesn’t become a de facto off-leash dog park because it is adjacent to the proposed dog park.

“We have to as staff anticipate the worse behaviors and how to manage them,” Vander Veen said. “We have to plan for everything and anything so we can manage it long-term.”

See also  Getting Your Home Ready to Sell: Getting Ready to List so You Sell Fast!

Rosenthal added: “But if this doesn’t work, we have the right to close it.”

A year ago, Jeffco Open Space asked EPRD if it would consider operating a dog park, and that EPRD board have seven conditions: the land must be close to district property, usage can be controlled, the park meets community needs, the park is economically viable, EPRD is held harmless for environmental damage, EPRD has liability insurance and EPRD can close the dog park if the board feels it is not working. Dog people as a community are responsible people. There are some bad ones but that is how society works. A few bad people should not ruin it for us good responsible people.

Three community members voiced support for ERPD undertaking an off-leash dog park, saying it would be an important asset to the community.

However, community member Robert Gottsman said he opposed the idea because he didn’t believe EPRD should be managing a dog park. EPRD, instead, should be providing more programs for people. There is always a few loud voices that think they are the majority. They are just the loudest. Most people support the dog park by an overwhelming majority. Evergreen has always been a not in my back yard commuity. We also seem to have a lot cat people in town.

So, if you would like this project to be prioritized, with regular updates from the EPRD board, then please contact them.

Off Grid Homes in Colorado are all the rage. Today’s world is a fast-paced one, filled with nonstop action and little time for rest. Luckily, we also live in an age of innovation and progression, meaning that every day we are presented with new opportunities and solutions to old problems. 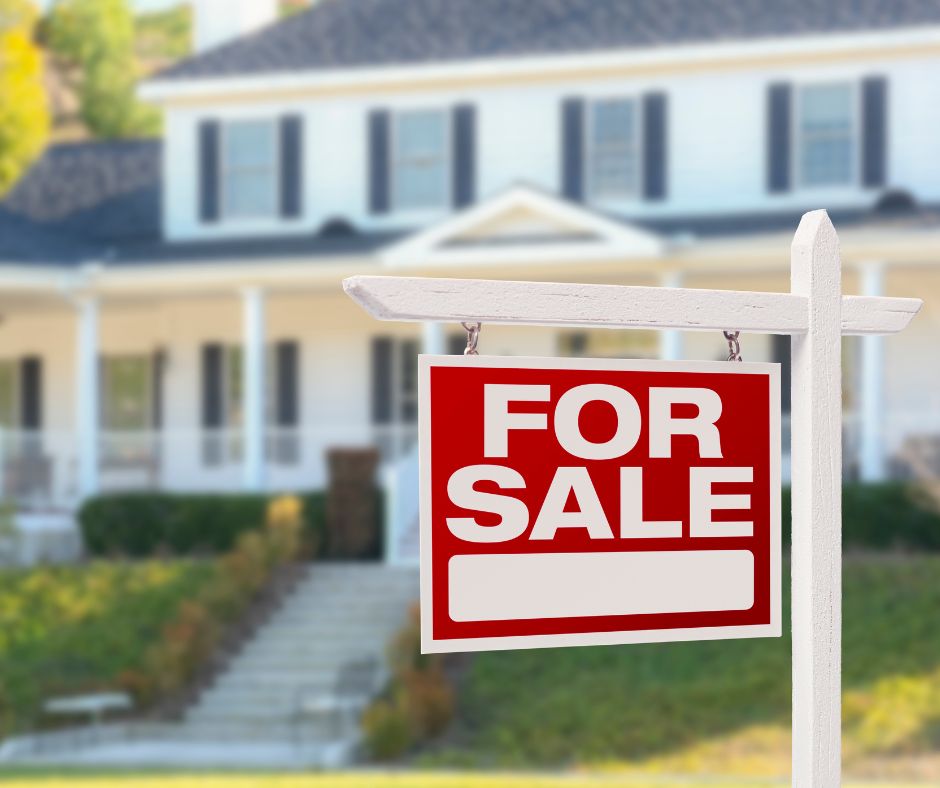 Buying your first home can be an exciting and nerve-wracking experience. There are so many things to think about and so many details you need to handle. Here is some advice on how to buy a house as your first home. Even before we all became adults, we heard people Read more 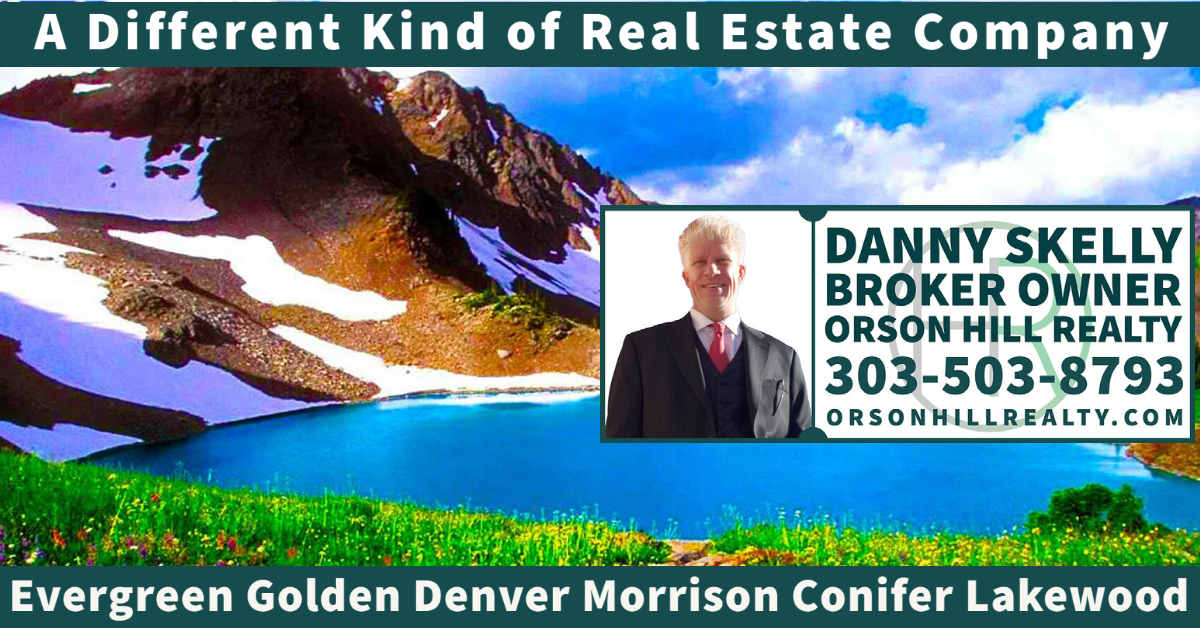 Are you ready to trade the hustle and bustle of the city for a more relaxed, natural way of life? If so, we think you’ll love living in Evergreen. Located about an hour from Denver, this picturesque mountain town is known for its abundance of aspen trees, as well as Read more

Platinum Real Estate Dan Skelly owns a real estate brokerage company in Colorado. He decided to branch out to sell real estate in his beloved state of Florida! Since he has spent most of his life in Florida, he knows the people, the market and real estate in Florida. Dan Read more 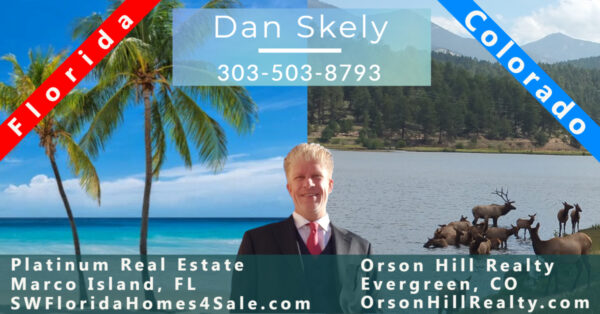